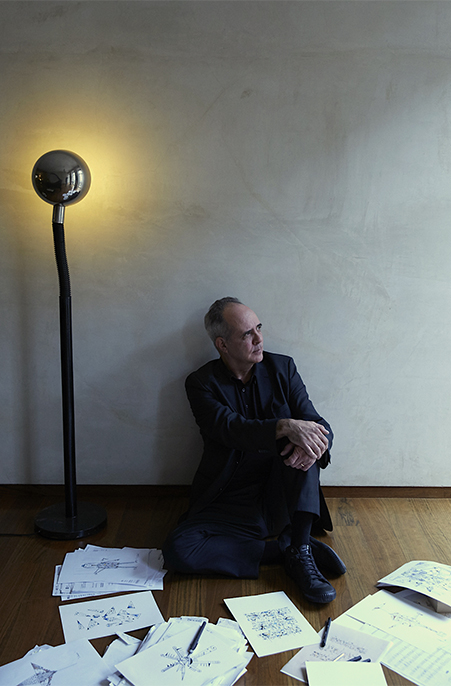 Rodrigo Leão was one of the musicians and composers behind the extraordinarily successful Portuguese ensemble Madredeus. He was in the band for nearly 10 years before leaving to focus on his own solo career.

Yet, Madredeus was only one of the many stops of an incredible 30-year journey that has seen Rodrigo Leão invite internationally acclaimed singers such as Portishead’s Beth Gibbons, The Divine Comedy’s Neil Hannon or Tindersticks’ Stuart Staples to sing on his albums and live shows; and perform with Ryuichi Sakamoto or Ludovico Einaudi, with whom he toured in Portugal, Spain and Italy.

Rodrigo remains, though, the same quietly spoken, modest and talented Lisboner who started out as a bassist in indie-rock band Sétima Legião before moving into Madredeus’ chamber-pop,  the neoclassical textures of his own early solo material and his own unique, wistful pop songs, with guest singers like alt-Fado singer Lula Pena, Brazilian star Adriana Calcanhoto, the São Paulo newcomer Thiago Pethit. Joan Wasser aka Joan as Policewoman, or the Australian singer Scott Mathew.

This quiet man has extended his talents into new and unexpected territories over the past few years. While performing live in some of the most legendary venues of the world – London’s Barbican Centre, Barcelona’s Palau de la Musica, the Parisian theatres Alhambra and Grand Rex, Amsterdam’s Melkweg, Teatro Municipal do Rio de Janeiro or Washington’s Kennedy Center, he has also found the time to create three major film soundtracks, including for Lee Daniels’ Oscar-nominated historical drama “The Butler” starring Forest Whitaker.

He was invited to lead the artistic festivities of the 40th anniversary of the Portuguese Revolution of 1974 with a free concert on the steps of the National Parliament in Lisbon, resulting in the live CD/DVD “O Espírito de Um País”, and created music for an installation by the late Japanese artist and aquarist Takashi Amano, “Underwater Forests” and for the Lisbon Gulbenkian Museum exhibition “Brain – Vastet than the Sky”, as well as producing limited-edition electronica album “A Vida Secreta das Máquinas”.

In 2015, the prestigious classical label Deutsche Grammophon released “O Retiro”, a collaboration with Lisbon’s acclaimed Gulbenkian Orchestra and Choir. Rodrigo followed it by recording a whole album of songs with the New York-based singer-songwriter Scott Matthew. 2016’s “Life Is Long” followed after the two men recorded together a couple of songs and they realised their sensibilities matched perfectly.

For 2018, to celebrate the 25th anniversary of his solo career, Rodrigo showed off the amazing versatility of his work, with the release of “O Aniversário”, a double-CD retrospective of his greatest hits and favourite compositions, and the reissue of “Os Portugueses”, the soundtrack he wrote for the Portuguese TV documentary series Portugal – A Social Portait.

At the same time, Rodrigo toured with a smaller band and started testing the material for his next studio project. This is “O Método”, his new album of all-original material being released worldwide by BMG February 21, 2020.

“O Método” was co-produced by the acclaimed Italian composer and musician Federico Albanese, who helped Rodrigo find the leaner, cleaner sound he was looking for. More atmospheric and enchanting, while also simpler in its sound landscapes: mostly created around acoustic piano and electronic ambiences, with the presence as needed of a small string section, the 20-element youth choir of Academia Musical dos Amigos das Crianças, and assorted acoustic and electric instruments.

The album also features guest vocals from Efterklang’s Casper Clausen on “The Boy Inside” and Rodrigo’s regular violinist Viviena Tupikova on “O Cigarro”.

Rodrigo’s own daughter Sofia sings on the album’s first single “A Bailarina”, a gentle, uplifting lullaby sung in a made-up language, designed to fit in with the record’s more mysterious, spiritual sound.

The video for “A Bailarina” was created from drawings made by Rodrigo himself. The cover design for the album and its singles was also derived from his artwork, a perfect translation of the mood and direction that he wanted the new album to convey.

For Rodrigo Leão, “O Método” is a new step forward in a spotless 30-year career and one of the highpoints of his musical development, an album that asks questions that may not have answers, but that helps the listener think, feel, become more human.

The February 2020 release of “O Método” will be accompanied by a new world tour.