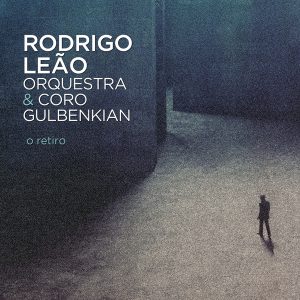 2. A period of group withdrawal for prayer, meditation, study, or instruction under a director

A former member of Madredeus, Portugal’s internationally successful acoustic ensemble, Rodrigo Leão has become a contemporary composer intent on exploring all facets of music-making. Having collaborated with kindred spirits Ólafur Arnólds, Ryuichi Sakamoto or Ludovico Einaudi and developed a style that takes its cues from what can be called “modern classical” or “contemporary classical”, Rodrigo is now ready for the next step in his career.

The new album is called “O Retiro” – “The Refuge” – and yet it poured out of his inspiration when he was never more in demand in a 30-year career. Therein, however, resides one of the greatest mysteries of creativity: why today, why now, why this way? There’s no good answer. It just is, the way it is.

If you know Rodrigo’s previous work you will immediately recognise his unmistakable melodic inspiration, if you don’t you will find yourself enraptured by his control of mood and melody. But, regardless of where you stand on his previous work, but you will also find something defiantly new in this album.

An orchestral project recorded with Lisbon’s Gulbenkian Orchestra and Choir, “O Retiro” is a synthesis of his three decades working as a composer and performer. His first album recorded for Universal Music, released under the prestigious Deutsche Grammophon label in Portugal and Spain, it’s also a piece that uses his experience as a springboard for higher, further flights, reorganizing his influences in new and surprising ways.

No wonder, since Rodrigo has evolved from a rock musician inspired by the British post-New Wave bands of the early 1980s. “O Retiro” is the logical continuation of all that has come before: Madredeus and their collaboration with acclaimed director Wim Wenders; Rodrigo’s initial solo work, that led Pedro Almodóvar to call him one of the most inspired contemporary composers; collaborations with acclaimed singers and songwriters like Beth Gibbons, Joan Wasser (Joan as Policewoman), Stuart Staples (Tindersticks), Neil Hannon (Divine Comedy); film and TV soundtracks, of which the best known has been Lee Daniels’ “The Butler”; sound crafting for multimedia installations such as “Underwater Forests” by the late  Japonese landscape designer Takashi Amano,still in exhibition at Lisbon Oceanarium ; collaborations; even an album of experimental electronica.

It all comes together in “O Retiro”, an orchestral sequence of swooping moods and enveloping melodies that literally melt into one another, united by the unique music-box melodicism of Rodrigo. Only one of the 13

pieces is a proper song – “Melancolia”, voiced by Selma Uamusse – but it fits smoothly into the consistent identity of the album. Like a soundtrack to a film yet to start filming, or a story being written on the moment, “O Retiro” places Rodrigo in the rarefied company of other musicians who have diluted the borders between popular and erudite, electronic and orchestral, such as Nico Mühly, Jóhann Jóhannsson or Deutsche Grammophon labelmate Max Richter.

Extending Rodrigo’s trademark instrumentation of low-key electronics and string quartet, the Gulbenkian Orchestra and Choir, as conducted by Rui Pinheiro, create new and impressionistic backgrounds for his melodic talent. Recorded by veteran sound engineer Thomas Lehmann, the magical acoustics of Lisbon’s Gulbenkian Foundation’s main hall transform the orchestral and choral arrangements by Carlos Tony Gomes (part of Rodrigo’s regular string quartet) and Steve Bartek (returning from his work on the Butler soundtrack), creating a protective cocoon of comfort and respite of the speed of the world around us.

Written in between Rodrigo’s many professional and performing trips, between Lisbon and the quiet little town of Avis, “O Retiro” is a moment of peace, an album of reflection and contemplation. A space laid out for all those looking to rest, relax and recharge; the latest step in a creative voyage that has led Rodrigo Leão around the world, from London’s Barbican Centre to Washington’s Kennedy Center through Paris’ Grand Rex, Barcelona’s Palau de la Musica, Istanbul’s Is Sanat, Theatro Nacional de Rio de Janeiro or Seoul’s LG Art Center, and around all the worlds in our world. It’s now your turn to visit it.